Exposure to extreme cold means the risk of frostbite, even after just a few minutes. Do you know the signs of frostbite?

A 32-year-old man’s wife called United Concierge Medicine and was immediately connected to the on-call provider. Her husband, the patient, could be heard moaning in the background. His wife informed our provider that the patient had been outside in sub-zero temperatures (literally -14 degrees) working on his troublesome car’s engine for nearly an hour. He came inside complaining about his fingertips being numb and red and extremely painful.

The UCM emergency medical provider easily guided the patient’s wife in establishing a video call using the UCM Now app, and was able to assess the man’s fingers directly with his wife’s assistance as well as screen the patient for hypothermia. The provider noted that the patient’s fingertips were deeply red, and, as she had the patient’s wife check capillary refill (the time taken for color to return to an external capillary bed after pressure is applied to cause blanching), his fingertip blood flow was delayed at 10 seconds as opposed to the normal 3-5 seconds.

Next, the UCM provider advised the patient’s wife to prepare a large bowl of warm water that would help gently start the rewarming process. The patient placed his hands in the warm water, and began feeling increased pain and tingling in his fingers. He was reassured that these sensations were to be expected, and he was encouraged to continue the soaking. Within minutes, the patient’s fingers were reported as feeling “much better” by the patient — who was understandably relieved!

Being well-versed in cold-weather related medical emergencies, the UCM provider informed the patient to look out for paleness and blistering about the fingertips that could develop over the next 24 hours — an indication of more advanced frostbite.

This patient’s diagnosis was a mild case of frostbite called frostnip, a milder version of frostbite, and does not cause permanent damage. 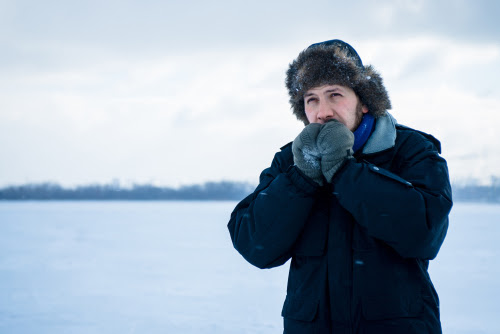 Learn more about Frostbite from the Mayo Clinic
SIGNS AND SYMPTOMS OF FROSTBITE:

United Concierge Medicine brings the power of the ER to you at the touch of a button with our unique treat and triage approach. Simply download the UCMnow app and one touch gets you access to a health care provider — whenever, wherever you need it — so you and your loved ones receive the right care, at the right time.